Once your serverless projects start to grow, you are faced with some choices on how to organize your growing projects. In this chapter we’ll examine some of the most common ways to structure your projects at a services and application (multiple services) level.

Now let’s look at the most common pattern for organizing serverless projects with our example repos.

Our extended notes app has two API services, each has their own well defined business logic:

And your app also has a job service:

The infrastructure on the other hand is created by the following stacks in CDK:

The microservice pattern on the other hand is a concept of keeping each of your services modular and lightweight. So for example; if your app allows users to create notes and make purchase; you could have a service that deals with notes and one that deals with buying.

The directory structure of your entire application under the microservice + monorepo pattern would look something like this.

A couple of things to notice here:

The microservice + monorepo pattern has grown in popularity for a couple of reasons:

Before we go through alternative patterns, let’s quickly look at the drawbacks of the microservice + monorepo pattern.

Most of the issues described above start to appear when your application begins to grow. However, there are services that help you deal with some of these issues. Services like IOpipe, Epsagon, and Dashbird help you with observability of your Lambda functions. And our own Seed helps you with managing deployments and environments of monorepo Serverless Framework applications.

The obvious counterpart to the monorepo pattern is the multi-repo approach. In this pattern each of your repositories has a single Serverless Framework project.

A couple of things to watch out for with the multi-repo pattern.

Even with the disadvantages the multi-repo pattern does have its place. We have come across cases where some infrastructure related pieces (setting up DynamoDB, Cognito, etc) is done in a service that is placed in a separate repo. And since this typically doesn’t need a lot of code or even share anything with the rest of your application, it can live on its own. So in effect you can run a multi-repo setup where the standalone repos are for your infrastructure and your API endpoints live in a microservice + monorepo setup.

Finally, it’s worth looking at the less common monolith pattern.

The monolith pattern involves taking advantage of API Gateway’s {proxy+} and ANY method to route all the requests to a single Lambda function. In this Lambda function you can potentially run an application server like Express. So as an example, all the API requests below would be handled by the same Lambda function.

Where the main function in your app.js is responsible for parsing the routes and figuring out the HTTP methods to do the specific action necessary.

It’s not the goal of this section to evaluate which setup is better. Instead, I want to layout what we think is a good setup and one that has worked out for most teams we work with. We are taking a middle ground approach and creating two repositories:

And in serverless-stack-demo-ext-api, you have:

Why? Most of the code changes are going to happen in the serverless-stack-demo-ext-api repo. When your team is making rapid changes, you are likely to have many feature branches, bug fixes, and pull requests. A bonus with serverless is that you can spin up new environments at zero cost (you only pay for usage, not for provisioning resources). For example, a team can have dozens of ephemeral stages such as: prod, staging, dev, feature-x, feature-y, feature-z, bugfix-x, bugfix-y, pr-128, pr-132, etc. This ensures each change is tested on real infrastructure before being promoted to production. 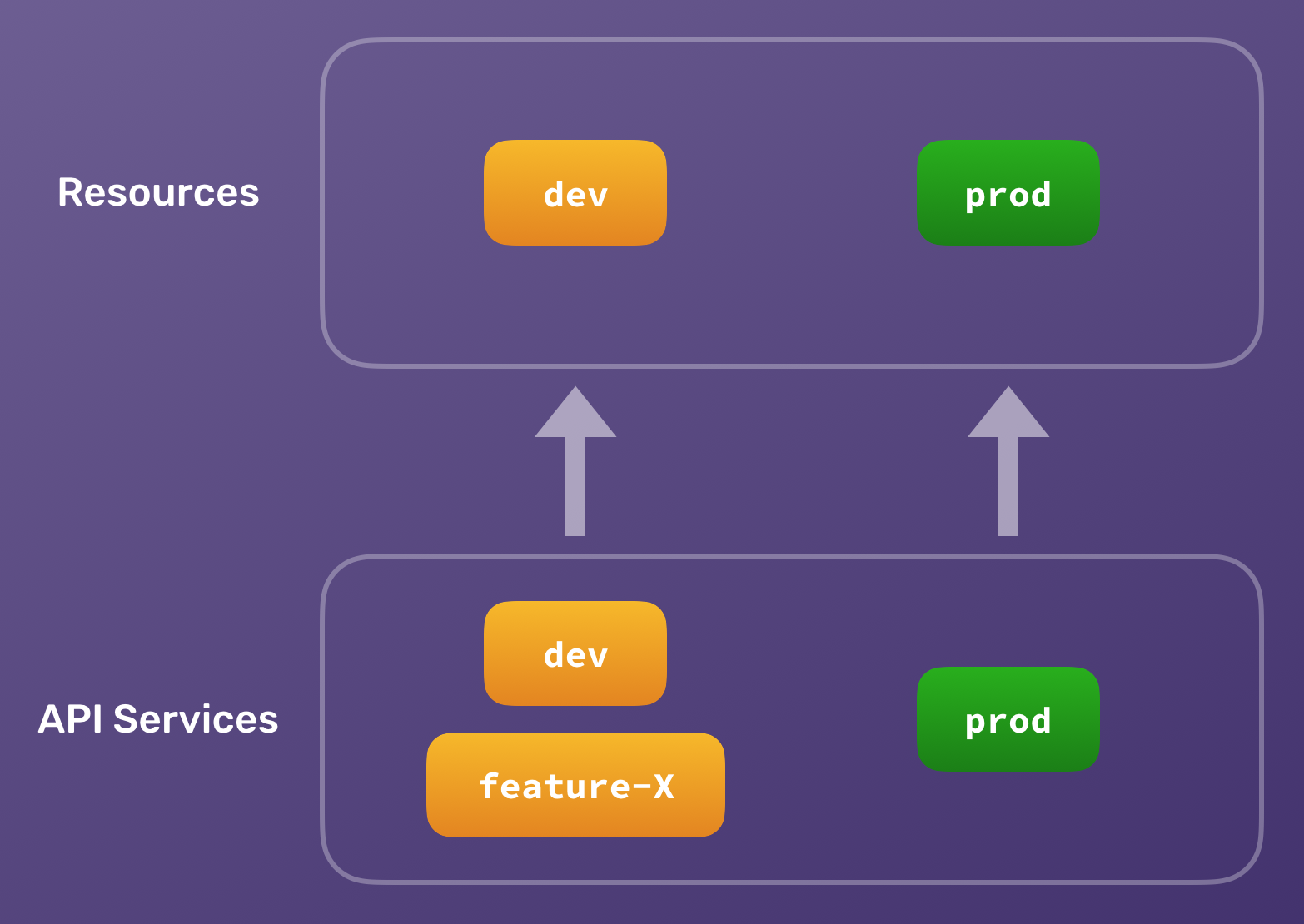 So if you have a service that doesn’t make sense to replicate in an ephemeral environment, we would suggest moving it to the repo with all the infrastructure services. This is what we have seen most teams do. And this setup scales well as your project and team grows.

Now that we have figured out how to organize our application into repos, let’s look at how we split our app into the various services. We’ll start with creating a separate service for our DynamoDB tables.