In this example we will look at how to use MongoDB Atlas in our serverless app using Serverless Stack (SST). We’ll be creating a simple API that returns a list of users.

By default our app will be deployed to an environment (or stage) called dev and the us-east-1 AWS region. This can be changed in the sst.json in your project root.

An SST app is made up of two parts.

First let’s create the API endpoint and connect it to a Lambda function. We’ll be using this to query our MongoDB database.

Replace the stacks/MyStack.js with the following.

We are doing a couple of things here.

What is MongoDB Atlas

MongoDB Atlas is the most advanced cloud database service on the market, with unmatched data distribution and mobility across AWS, Azure, and Google Cloud. It also has built-in automation for resource and workload optimization.

MongoDB’s JSON-like document data model maps to the objects in your application code, providing the flexibility to model for a wide variety of use cases while also enabling you to easily evolve your data structures.

Let’s create our MongoDB database. Start by heading over to MongoDB.com to create an Atlas account.

To learn more about the deployment types head over to the MongoDB docs.

To create a new database, we are using the new Serverless Instance option. Make sure to select AWS as the cloud provider and pick a region where you are deploying your SST app. In this example, we are using us-east-1.

Once our database is created, click Add New Database User. 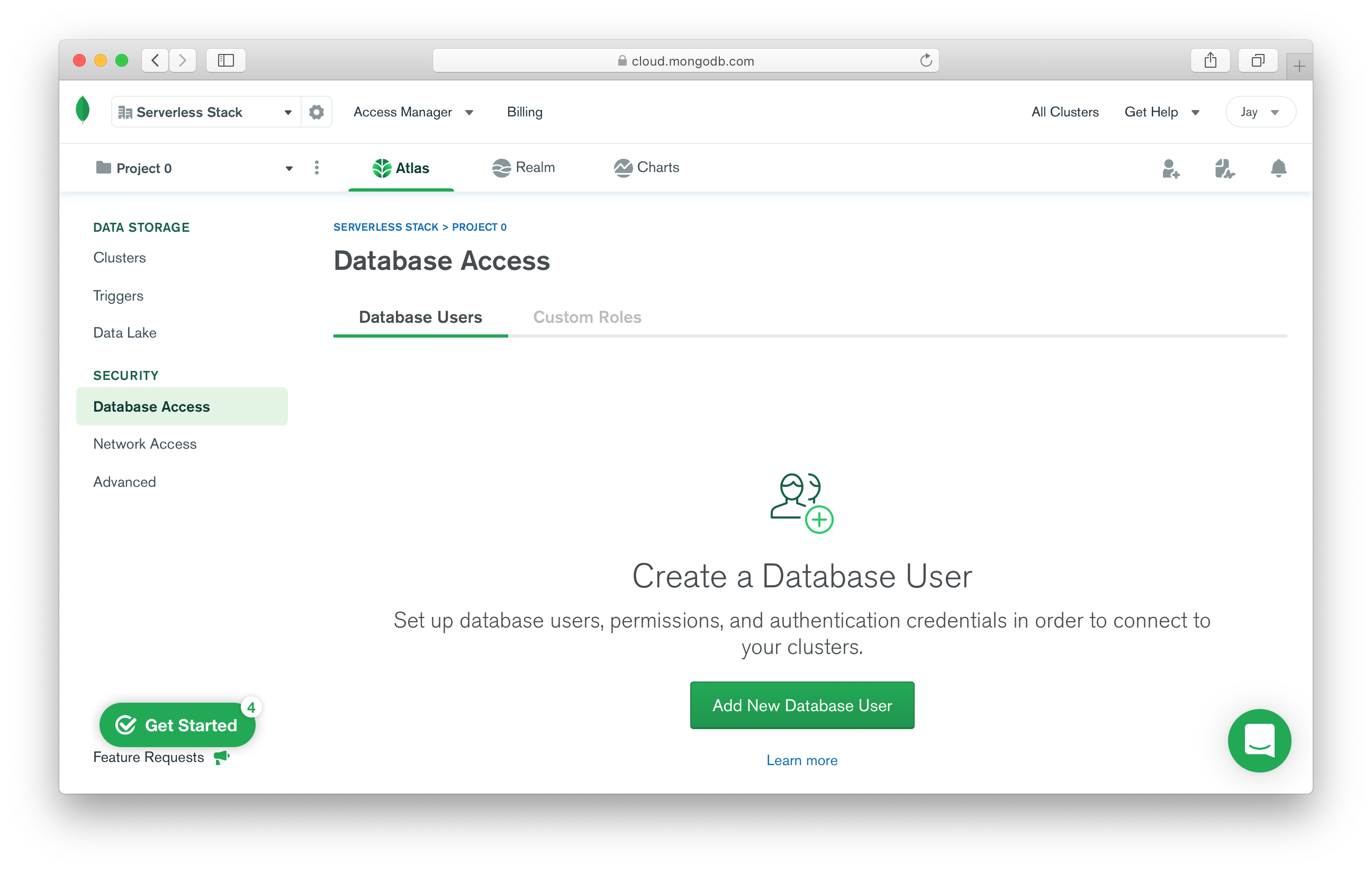 For now we are using Password as our Authentication Method. In this case we are using mongodb as our username and using the Autogenerate Secure Password option. Make sure to save the password because we are going to need it later. 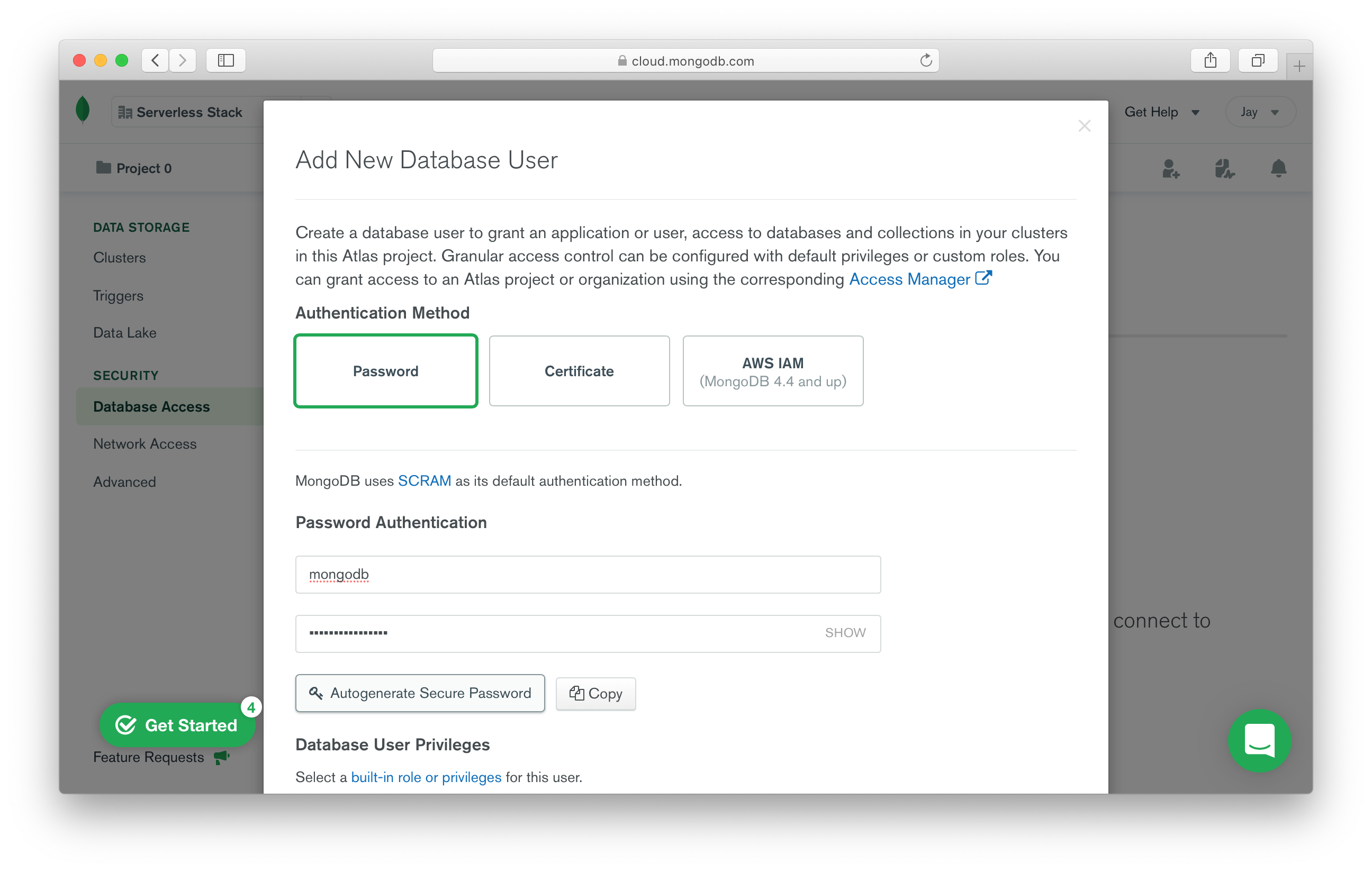 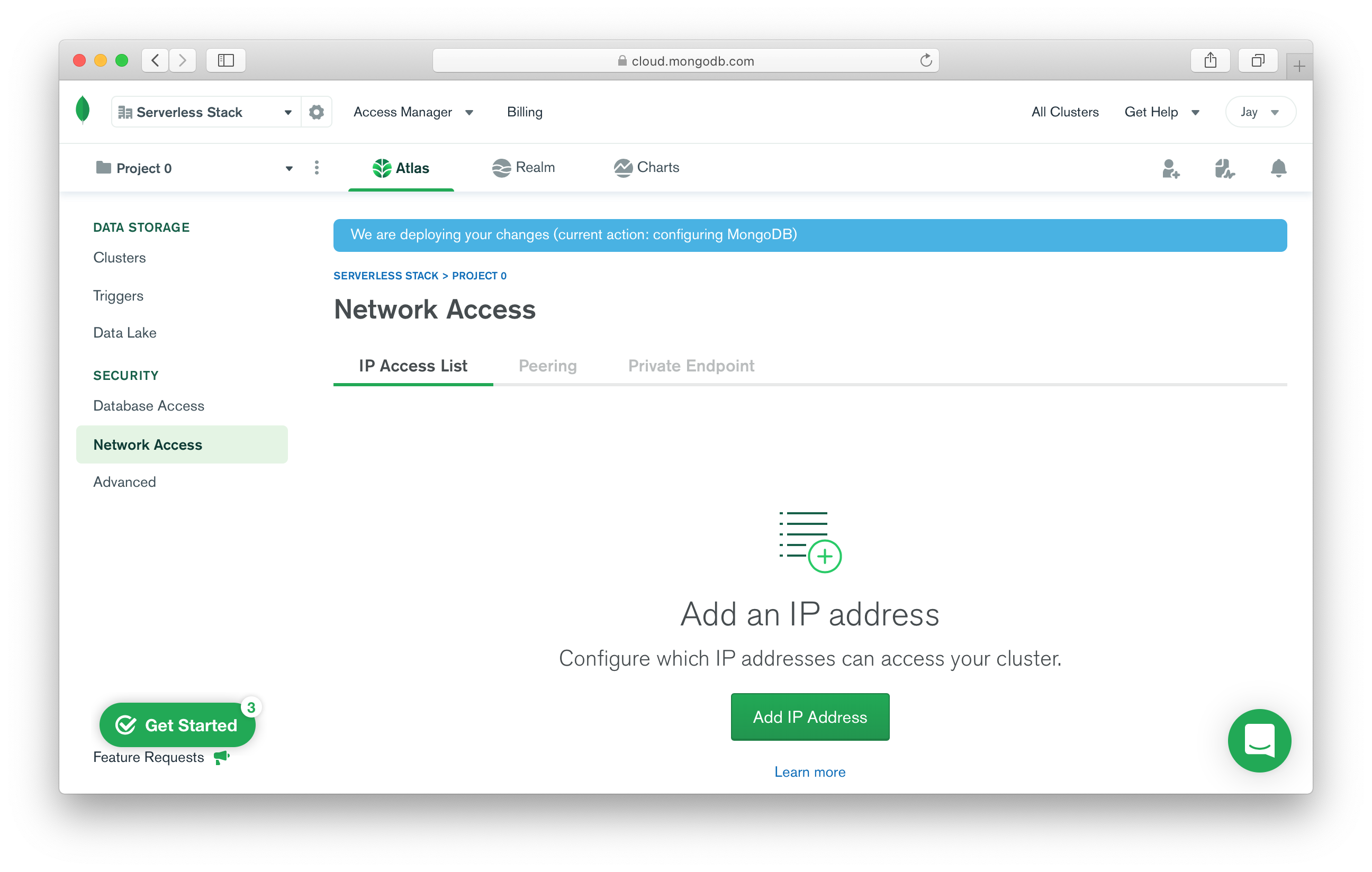 For now we’ll use the Allow Access From Anywhere option. 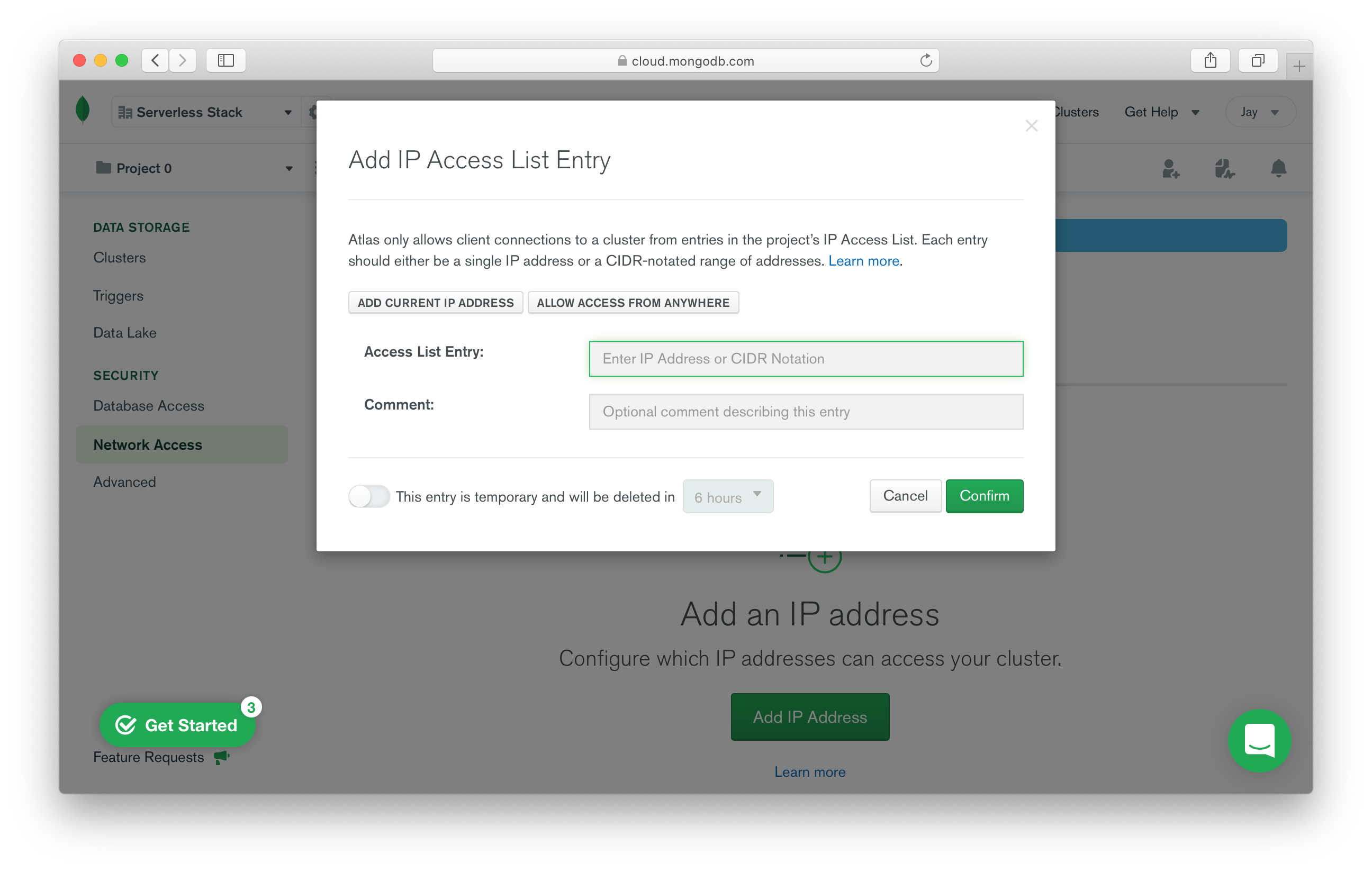 Once those changes have been deployed, click the Browse collections button and add some test data. We are creating a database named demo and inside the database, adding a collection called users and with two sample documents. 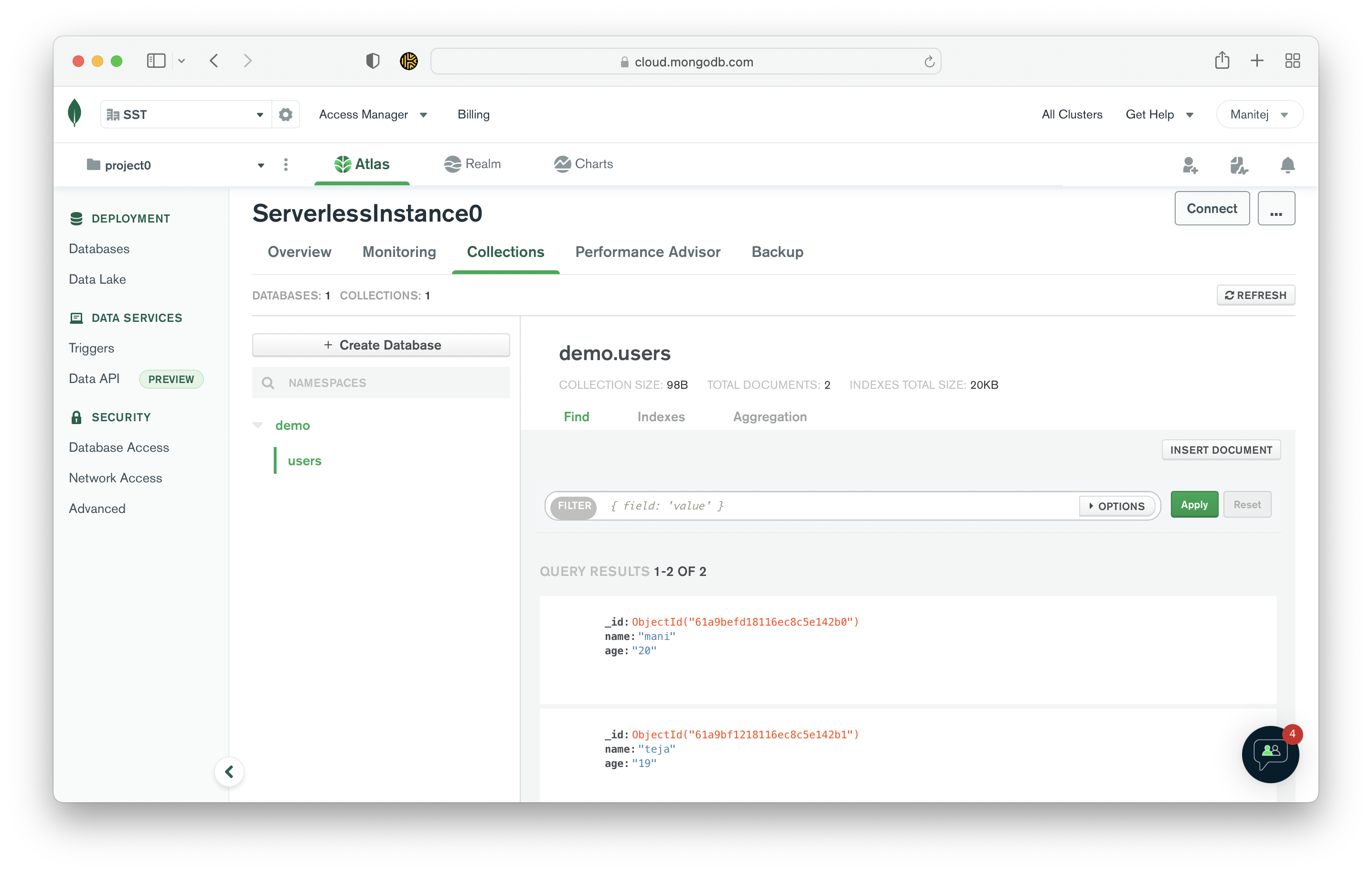 Finally, let’s get the connection string to connect to our new MongoDB database.

Click Connect and use the Connect your application option. 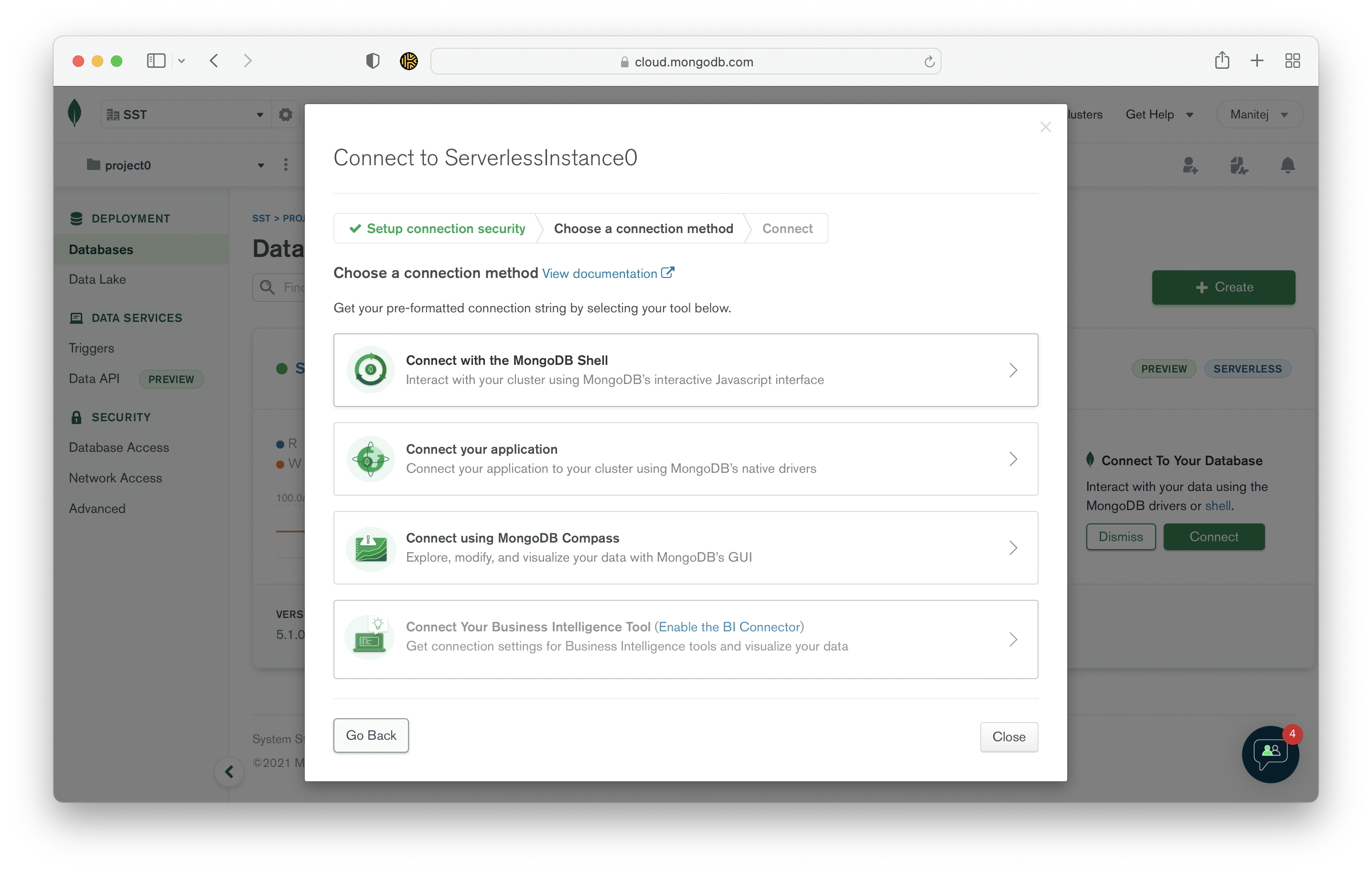 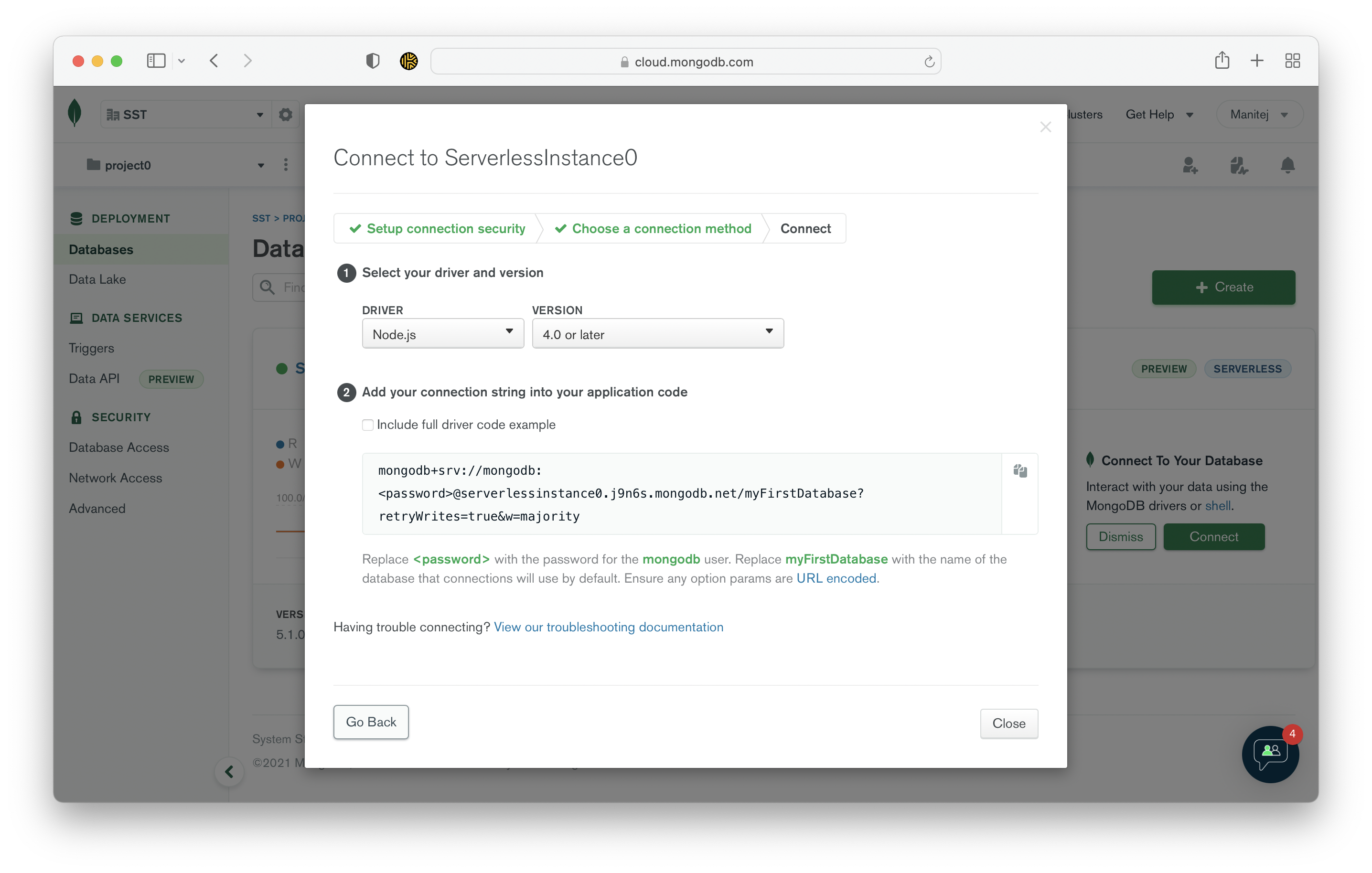 Create a new .env.local file in your project root and add your connection string.

Make sure to replace <password> with the password that we had copied while creating a database user above.

We also want to make sure that this file is not committed to Git.

So add it to the .gitignore in your project root.

We are now ready to add the function code to query our newly created MongoDB database.

Replace src/lambda.js with the following.

The first thing to note here is the connectToDatabase method. We use the connection string from the environment and connect to our sample database. But we save a reference to it. This allows us to reuse the connection as long as this Lambda function container is being used.

The handler function should be pretty straightforward here. We connect to our database and query the users collection in our database. And return 2 items. We then JSON stringify it and pretty print it.

The line of note is:

As the comment explains, we are telling AWS to not wait for the Node.js event loop to empty before freezing the Lambda function container. We need this because the connection to our MongoDB database is still around after our function returns.

Let’s install our MongoDB client. As mentioned at the beginning of this example, it is not compatible with esbuild, so we are going to install it separately.

Add the following to src/package.json.

Note, this isn’t the same package.json in your project root.

And run the following inside the src/ directory.

We are now ready to test our API!

SST features a Live Lambda Development environment that allows you to work on your serverless apps live.

The first time you run this command it’ll take a couple of minutes to deploy your app and a debug stack to power the Live Lambda Development environment.

The ApiEndpoint is the API we just created. Let’s test our endpoint. If you open the endpoint URL in your browser, you should see a list of users being printed out. 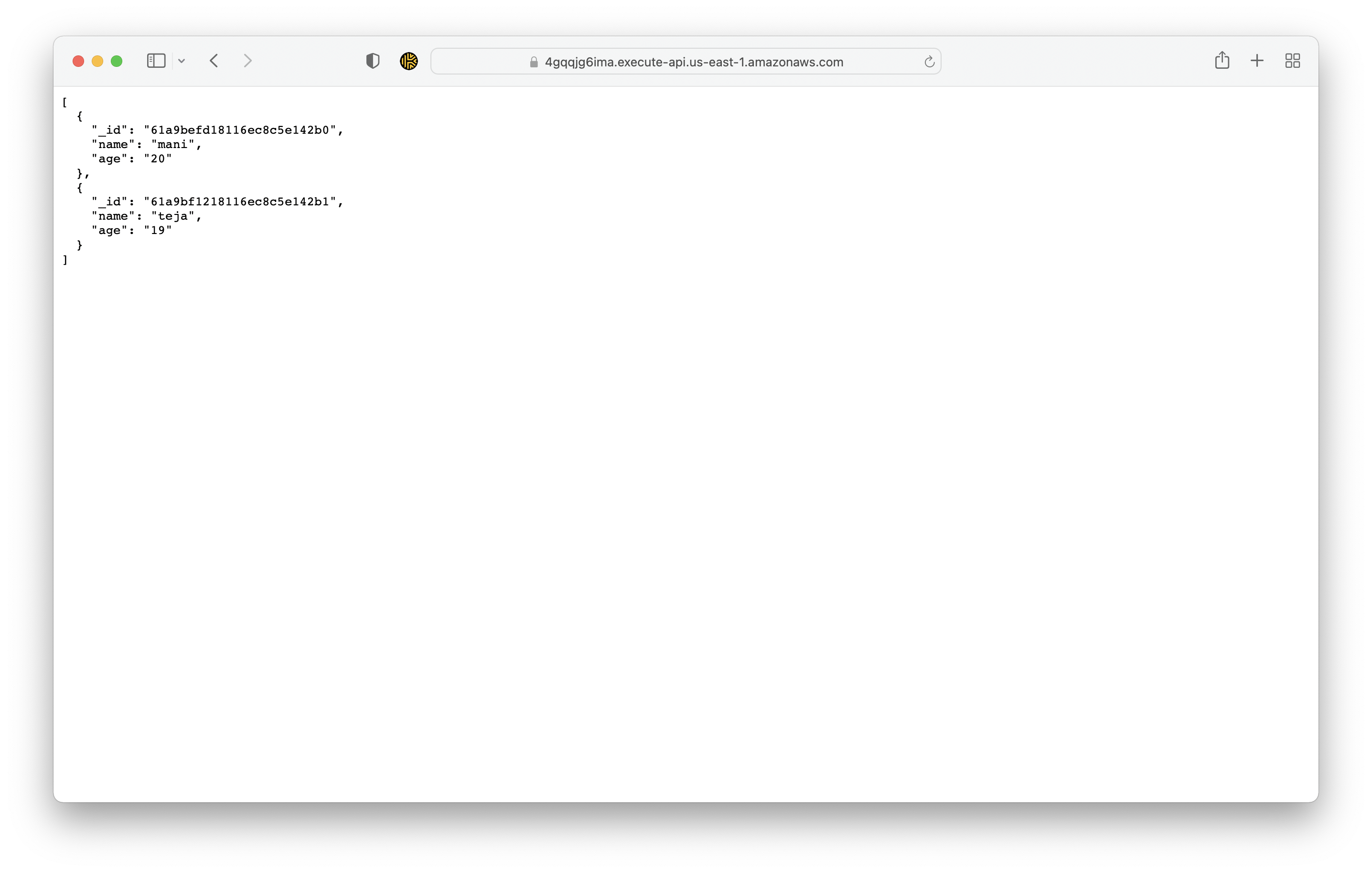 Now let’s make a quick change to our database query.

Replace the following line in src/lambda.js.

This will limit the number of users to 1. 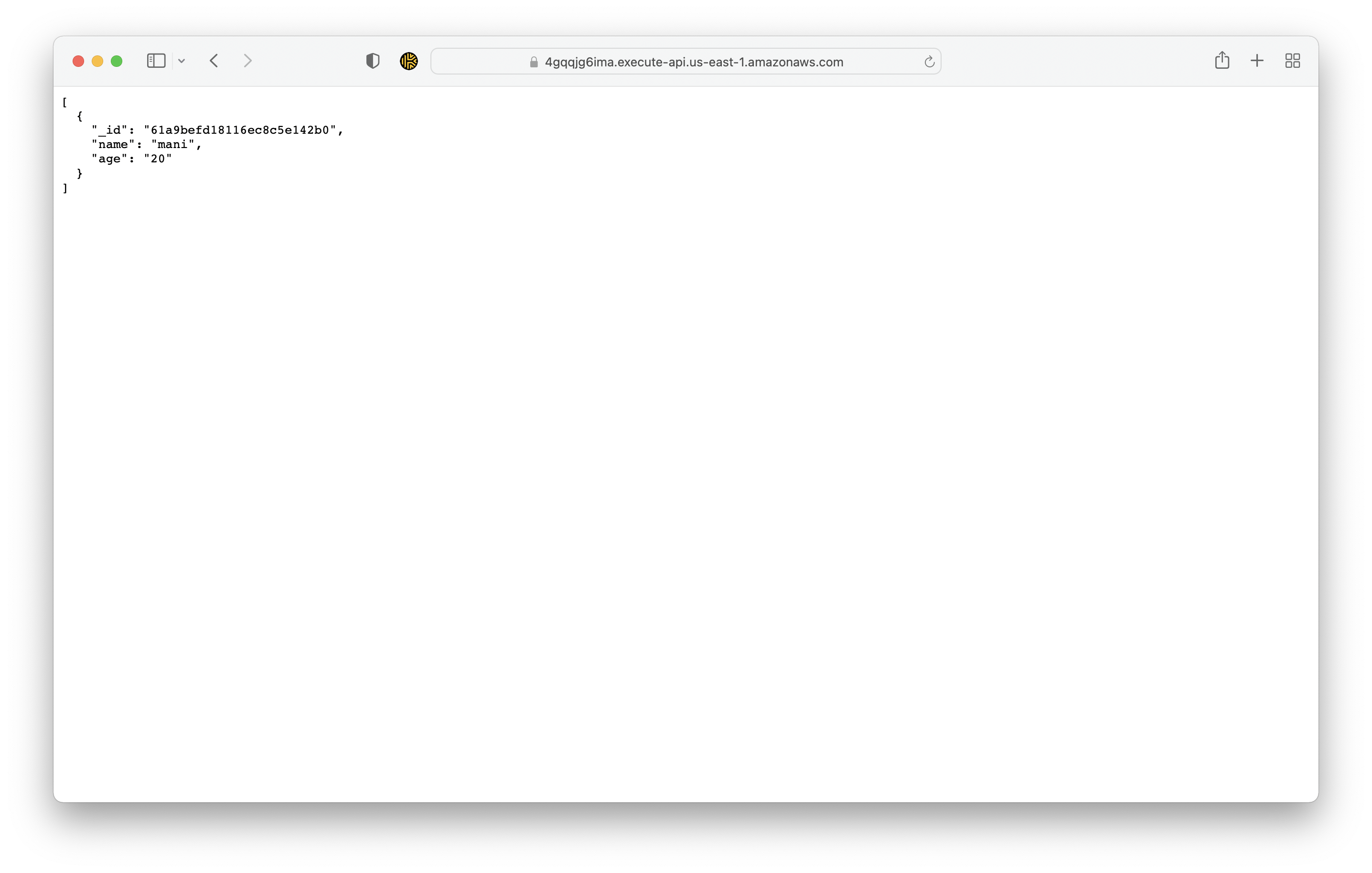 To wrap things up we’ll deploy our app to prod.

This allows us to separate our environments, so when we are working in dev, it doesn’t break the API for our users.

Finally, you can remove the resources created in this example using the following commands.

And that’s it! We’ve got a serverless API connected to a MongoDB serverless database. We also have a local development environment, to test and make changes. And it’s deployed to production as well, so you can share it with your users. Check out the repo below for the code we used in this example. And leave a comment if you have any questions!

Comments on this example

Star us on GitHub
&

SST is an open source framework for serverless.

Make changes and test your Lambda functions live, without having to redeploy.

View on GitHub
View the guide